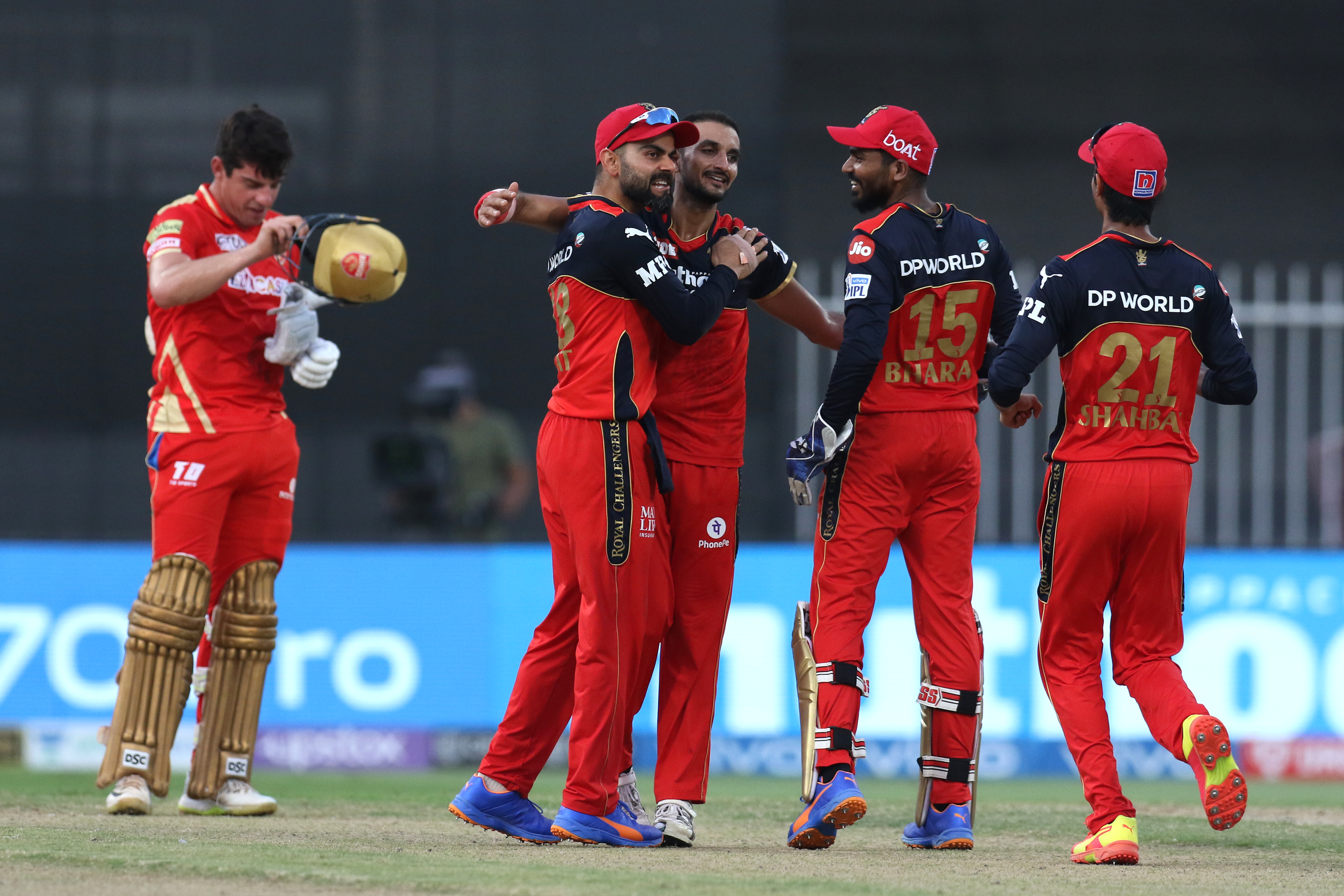 The Virat Kohli-led Royal Challengers Bangalore (RCB) beat Punjab Kings (PBKS) in Match 48 of the VIVO Indian Premier League (IPL) 2021 in Sharjah on Sunday and became the third team after Chennai Super Kings and Delhi Capitals to seal a place in the Playoffs.

While Glenn Maxwell starred with the bat, Yuzvendra Chahal was the pick of the bowlers as RCB secured a six-run win.

Needing 165 runs to win, PBKS skipper KL Rahul and Mayank Agarwal once again put up a fantastic show with the bat. The pair scored at a good click and brought up the fifty-run stand in the seventh over.

Mayank, who was batting on 20 from 20 balls at the end of the seventh over, started to shift the gears. The right-hander creamed four fours over the course of the next three fours as PBKS reached 81/0 after 10 overs.

Shahbaz Ahmed gave RCB their first success with the ball as he got KL Rahul out for 39 in the 11th over. While Mayank brought up a fine half-century in the 13th over, Chahal dismissed Nicholas Pooran as RCB picked the second PBKS wicket.

While Aiden Markram and Mayank pushed PBKS past 110 after 15 overs, Chahal, in his double-wicket 16th over, dismissed Mayank and Sarfaraz Khan to push PBKS on the backfoot. George Garton then had the better of Markram in the 17th over.

While Shahrukh Khan opened his shoulders and hit a couple of big hits, it was not enough as RCB went on to beat PBKS by 6 runs.

RCB, who were unchanged, elected to bat against PBKS, who made three changes to their side, bringing in Harpreet Brar, Sarfaraz Khan and Moises Henriques.

While PBKS conceded just 11 runs in the first two overs, Padikkal hit a six and a four in the third over. PBKS then squandered two chances in an over – one stumping against Kohli and one catch to dismiss Padikkal. RCB captain Kohli got another reprieve in the next over after Sarfaraz could not hold onto a sharp catch before RCB ended the powerplay at 55/0.

PBKS started to turn the tide through Henriques. The all-rounder snapped two wickets in the tenth over – his first of the match – dismissing Kohli and Daniel Christian. He then had the better of Padikkal in the 12th over.

Glenn Maxwell though counterattacked. He took on Brar in the 13th over, tonking two sixes. In the 15th over, Maxwell went after Bishnoi, hammering two maximums as RCB moved past 100.

Maxwell and AB de Villiers then targeted Mohammad Shami in the 17th over, scoring 17 runs with the help of two fours and a six. The pair brought up a fifty-run stand while Maxwell completed his fifty in the next over.

While ABD cranked a six in the penultimate over, he was run-out in the same over, courtesy a direct-hit from Sarfaraz. Shami then delivered a three-wicket final over before RCB eventually posted 164/7 on the board.