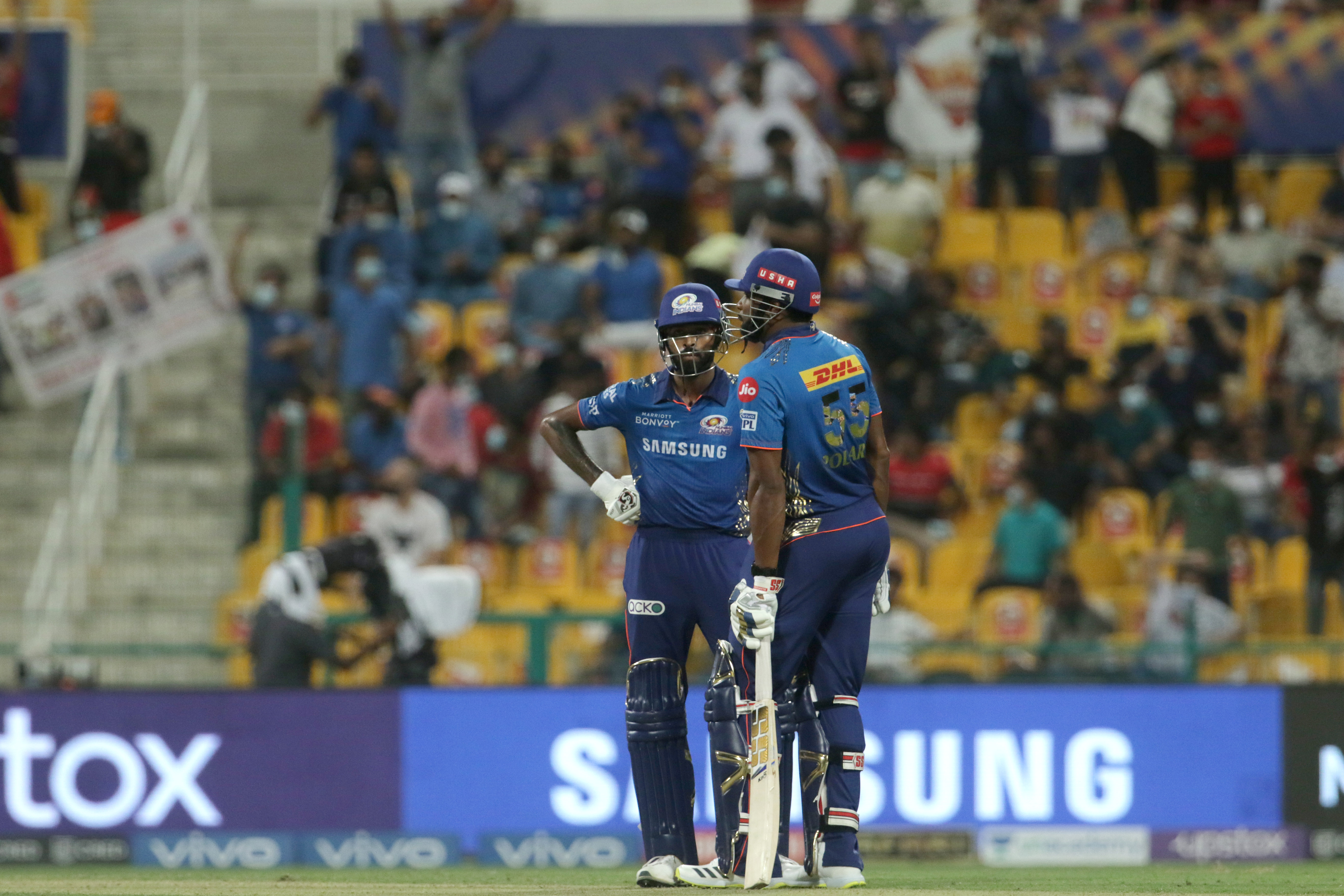 Mumbai Indians (MI) returned to winning ways after they beat Punjab Kings (PBKS) by six wickets in Match 42 of the VIVO Indian Premier League (IPL) in Abu Dhabi on Tuesday.

After limiting PBKS to 135/6, MI chased down the target in 19 overs to pocket two points.

In the chase, MI were dealt with two big blows as Ravi Bishnoi dismissed Rohit Sharma and Suryakumar Yadav in the fourth over. While Rohit was caught by Mandeep Singh, Bishnoi let one sneak through the defence of Suryakumar to disturb the timber.

Quinton de Kock was then joined by Saurabh Tiwary and the duo started to rebuild the innings. The pair kept the scorecard ticking and added a vital 45-run stand.

While de Kock was dismissed by Mohammad Shami in the 10th over, Tiwary continued his good work as he and Hardik Pandya took MI past 90. However, the left-hander fell short of his fifty as Nathan Ellis struck in the 16th over.

Hardik, who was joined by Kieron Pollard in the middle, then creamed a four and a six in the 17th over as MI moved closer to 110. Pollard then went after Arshdeep Singh, hitting a four and a six as MI scored 13 runs in the next over to reach 120/4.

PBKS made one change to their team as Mandeep Singh replaced Mayank Agarwal while MI made two changes to their playing XI, bringing in Saurabh Tiwary and Nathan Coulter-Nile in place of Adam Milne.

MI kept things tight with the ball in the powerplay and managed to strike in the sixth over as Krunal Pandya got Mandeep out LBW. However, it was Kieron Pollard, who landed two massive blows in the seventh over as he had the better of Chris Gayle and PBKS skipper KL Rahul.

Jasprit Bumrah then had the better of Nicholas Pooran as MI reduced PBKS to 48/4.

PBKS needed a partnership and Aiden Markram and Deepak Hooda did just that. The pair kept the scorecard ticking and added a valuable 61-run stand to push PBKS closer to 110 before Markram was dismissed for 42 by Rahul Chahar in the 16th over.

Two overs later, Bumrah got Hooda out as MI eventually limited PBKS to 135/6.