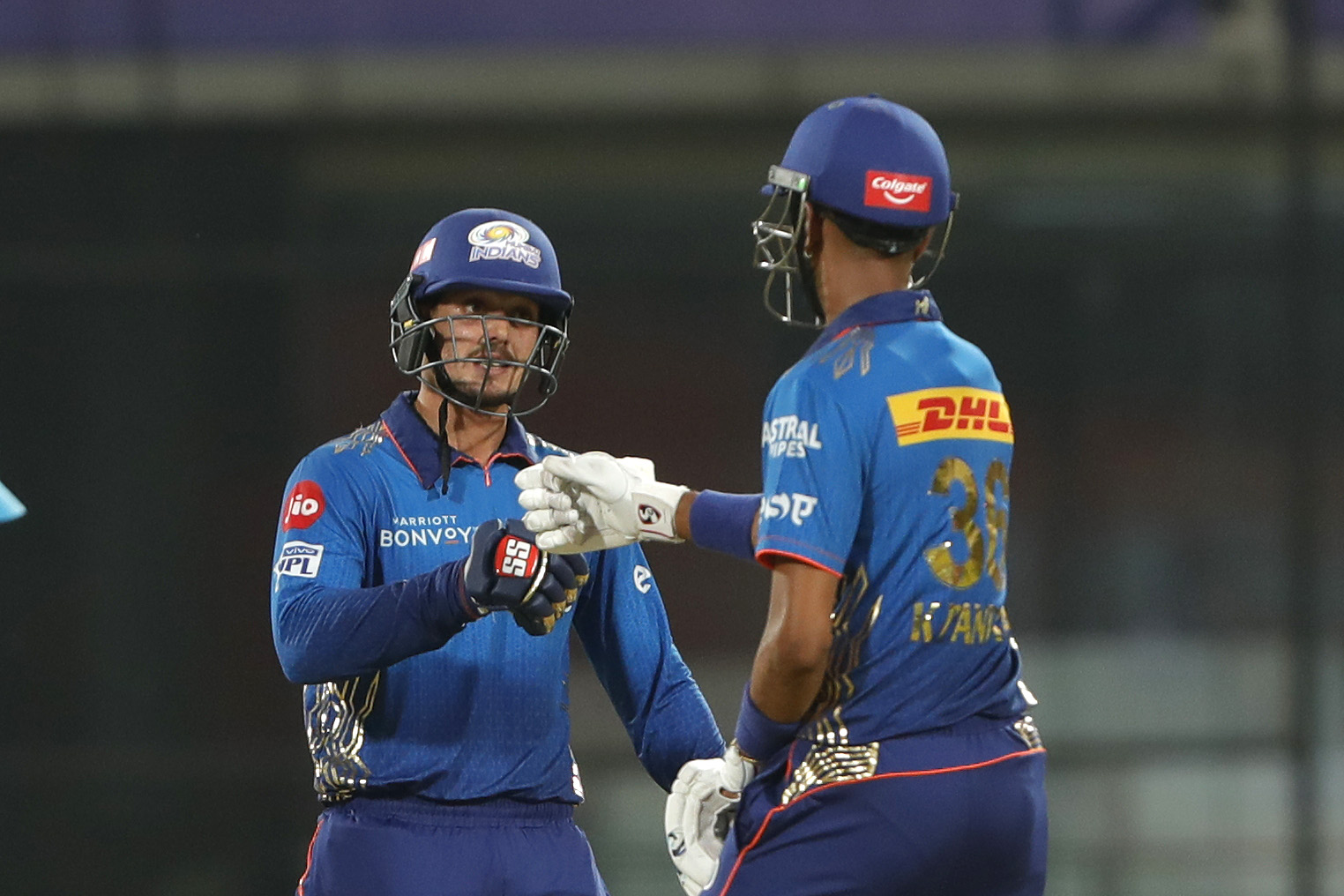 Mumbai Indians (MI) were back to winning ways after registering a victory by seven wickets over Rajasthan Royals in Match 24 of the VIVO Indian Premier League (IPL) 2021 at the Arun Jaitley Stadium in Delhi on Thursday.

Quinton de Kock scored an unbeaten 70 that helped Mumbai Indians chase down the target with ease before the bowlers restricted RR to a total of 171-4.

Chasing 172, the Mumbai Indians openers were off to a cautious start, scoring 27 in the first four overs. After a quiet first couple of overs, de Kock smacked two fours and a six. Rohit also attacked from the other end as he introduced his iconic pull shot to bring up his first maximum.

de Kock smashed a four and a six each against Morris in the 6th over. However, the pacer broke the 49-run partnership after Rohit was caught by Sakaria at mid-on and MI were 49 for 1 at the end of powerplay.

Suryakumar Yadav started aggressively and the right-hander was off the mark in style with two fours. Both – de Kock and Surya ensured the momentum stood by MI’s side and kept the boundaries flowing off the bat against the RR seamers.

MI were 83-1 after 9 overs before Morris provided the all-important breakthrough to get rid of Surya, who scored 16.

Meanwhile, de Kock reached his fifty and was joined by Krunal Pandya. Krunal hit his first six of the innings, straight down the ground against Tewatia as MI required only 41 off the last five overs.

The equation came down to 32 off 24 deliveries. Krunal smacked Mustafizur for a massive six before he edged one into the stumps.

Pollard wrapped up the chase after Morris conceded 16 runs in his final over and MI sealed a victory by seven wickets.

Earlier, an unchanged Rajasthan Royals side were put in to bat first against Mumbai Indians, who replaced Ishan Kishan with Nathan Coulter Nile.

Openers – Buttler and Jaiswal found it difficult to attack against the MI pacers with the new ball. The duo added 3 boundaries in the first four overs. Buttler was given an early life after being dropped by Chahar.

The right-hander capitalized on the missed chance and smashed a four and six each against Jayant Yadav in the 5th over. Jaiswal on the other hand creamed a four and pulled one against Coulter-Nile for a six, with RR 47-0 at the end of powerplay.

Buttler targeted the leg side boundary and clubbed a six each against Jayant and Chahar in the next two overs. However, the right-hander got deceived in flight against Chahar and was stumped as MI had their first breakthrough.

RR skipper, Sanju Samson started confidently, creaming three boundaries against spinners Chahar and Krunal. Jaiswal on the other hand, cleared the ropes against Chahar before the left-hander was caught and bowled in the same over.

RR were 91/2 after 10 overs, with Dube and Samson in the middle. Dube added 2 more fours to the count after Coulter-Nile conceded just 1 run in the 11th over.

The Royals accelerated post the 14th over and scored 27 in the next two, bowled by Jayant and Boult. While Dube muscled Jayant over long-on for a six, the RR skipper creamed two fours against Boult.

The 50-run stand was up for the third wicket but MI bounced back with two quick wickets and both settled batsmen were back to the hut.

Samson was castled in the 18th over by Boult, who executed the perfect yorker, right inside the block hole. On the other end, Dube was caught and bowled by Bumrah in the penultimate over.

RR scored 12 off the final over posted a competitive total of 171/4 on the board after Miller hit the final delivery for four.