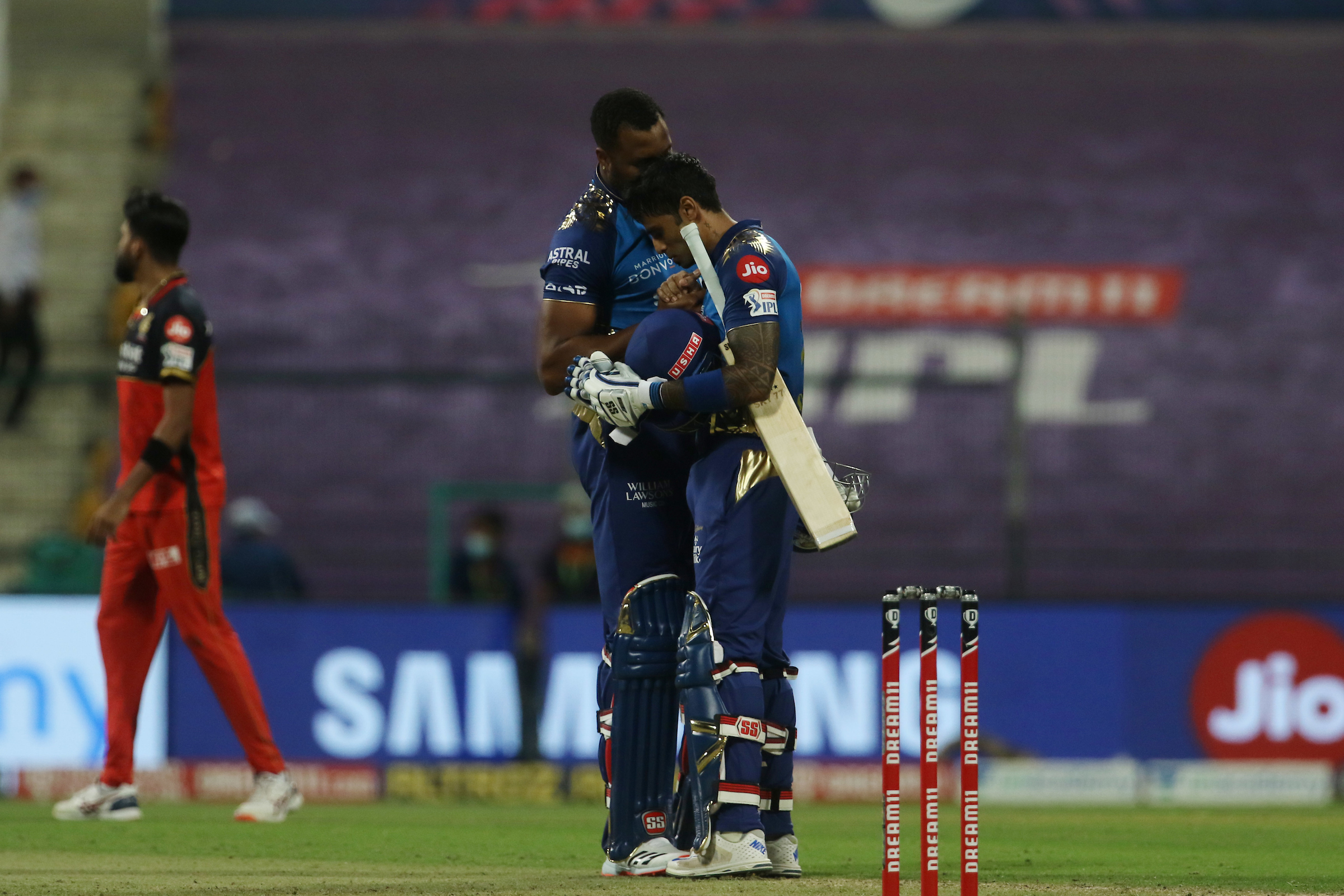 Mumbai Indians (MI) registered their eighth win of the Dream11 Indian Premier League (IPL) 2020 after they beat Royal Challengers Bangalore (RCB) by five wickets in Match 48 at the Sheikh Zayed Stadium in Abu Dhabi on Wednesday.

Needing 165 runs to win, MI made a quick start as Ishan Kishan and Quinton de Kock scored 35 runs from the first five overs. However, MI lost their first wicket as de Kock was holed out in the deep off Mohammed Siraj’s bowling in the final over of the powerplay.

Yuzvendra Chahal, introduced into the attack in the eighth over, struck in his first over as he got Ishan Kishan out for 25.

MI lost their third wicket in the 11th over after Devdutt Padikkal took a stunning diving catch to get Saurabh Tiwary out. Meanwhile, Suryakumar Yadav, after playing some delectable shots, moved to 28 off 20 balls.

The right-hander creamed four fours and a six in the next three overs as MI moved past hundred in the 14th over. While Krunal got out in the same over, Hardik, who replaced his brother in the middle, cranked a six on the fourth ball he faced as MI reached 117/4 at the end of the 15th over.

MI needed 48 from the last five overs and Surya scored 13 of those runs in the 16th over as he creamed three fours off Siraj and brought up his third fifty of the season in 29 deliveries. He added a four and six to his account over the course of the next two overs as MI reached 149/4 after 18 overs.

While Morris got Hardik out in the 19th over, Kieron Pollard hit a four on the final ball of the penultimate over to bring down the target to three runs in the final over.

Surya then closed out the game for MI as he creamed his 10th four of the match and sealed a five-wicket win for his side.

RCB openers – Devdutt Padikkal and Phillipe – were a little watchful in the first two overs before the two hit four fours in the next two overs. The right-hander added a six to his tally before inside-edging Boult for four in the fifth over.

The pair completed a fifty-run stand as RCB moved to 54/0 at the end of the powerplay.

While the duo hit Rahul Chahar for three fours in the eighth over, the leg-spinner dismissed Phillipe in the same over as Quinton de Kock completed a sharp stumping to give MI their first wicket.

Padikkal then completed his fourth IPL fifty in the 11th over. But MI struck back as Jasprit Bumrah, brought back into the attack in the 12th over, got the big wicket of Virat Kohli and became the third youngest to take 100 IPL wickets.

AB de Villiers scooped James Pattinson for a six and followed it up with a four in the 14th over. Devdutt Padikkal then took on Chahar, hitting two fours and a six as RCB moved to 129/2 after 15 overs.

MI though started to turn the tide as Kieron Pollard got ABD out in the 16th over and Bumrah followed it up with a two-wicket maiden, dismissing Shivam Dube and a well-set for Padikkal for 74.

In the 18th over, Trent Boult dismissed Chris Morris as MI picked four wickets for 7 runs. Gurkeerat Singh Mann and Washington Sundar then added 26 runs together as RCB eventually posted 164/6 on the board.