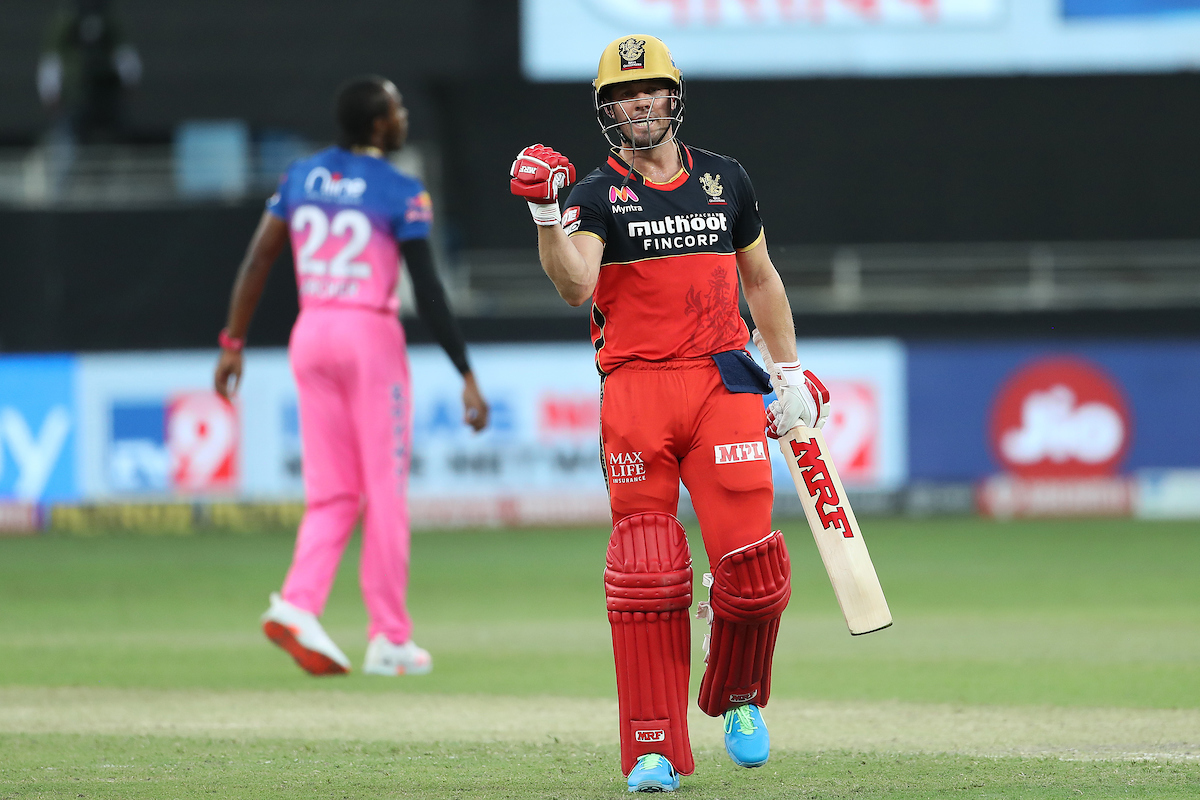 Needing 178 runs to win, RCB made a watchful start before Aaron Finch took on Jofra Archer in the third over, hitting the right-arm speedster for two sixes.

However, Finch got out in the next over as Shreyas Gopal gave RR their first breakthrough after Robin Uthappa completed the catch.

Virat Kohli joined Devdutt Padikkal in the middle and the two hit three fours between them over the next two overs to take RCB to 47/1 at the end of the powerplay.

The Padikkal-Kohli duo completed the fifty-run stand after Kohli tonked a six off Shreyas Gopal in the tenth over. RCB added 25 runs in the next three overs to move past hundred.

However, RCB lost Padikkal and Kohli on successive deliveries. While Padikkal was holed out at long-on, Kohli got out for 43 after Rahul Tewatia took a fine catch at the deep mid-wicket boundary rope.

RCB were 104/3 after 14 overs and needed 75 runs in the last six overs to cross the finish line. The next four overs saw RCB score 39 runs, with AB de Villiers hitting two sixes and a four to move to 28 off 16 balls.

RCB had to score 35 runs off the last two overs and ABD turned it on and did it in some style. Mr 360 hammered three sixes on the first three balls – first over covers, second over long-on and third over deep backward square. Gurkeerat Singh Mann also hit a four as RCB scored 25 in the over to bring down the target to 10 from 6 deliveries.

RCB scored those 10 runs in 4 deliveries as ABD closed out the game with six and in that process, completed his match-winning fifty.

Earlier, after electing to bat, RR opened the innings with Robin Uthappa and Ben Stokes.

While the two scored only five runs from the first two overs, Uthappa and RR shifted gears in the third over as the right-hander hit four fours off Washington Sundar.

Uthappa creamed a drive through the off side to start the proceedings and followed it up with three fours through the leg-side.

Uthappa continued to attack as he hit a six and a four while Stokes hit his first four of the match as RR scored 17 of the fourth over to move to 38/0.

While RR brought up their fifty in the final over of the powerplay, they also lost Stokes in the same over after he gloved one to AB de Villiers off Chris Morris’ bowling.

Meanwhile, Uthappa, who had earlier completed 4500 IPL runs, added two more fours to his account in the seventh over.

RCB struck twice in the eighth over via Yuzvendra Chahal. First, he had Uthappa caught at the deep mid-wicket after the right hander scored 41 off 22 balls, and then, got the wicket of Sanju Samson who was caught at long-off by Morris.

Jos Buttler and Steve Smith then joined forces and had a rebuilding job at their hands. Buttler was quick to get off the blocks as he moved to 17 off 13, with a four and a six. Meanwhile, Smith too kept the scoreboard ticking as he and Buttler completed the fifty-run stand in the 15th over, with Smith hitting two fours in the over.

Morris, then added two more wickets to his account in the final over and RR posted 177/6 on the board.