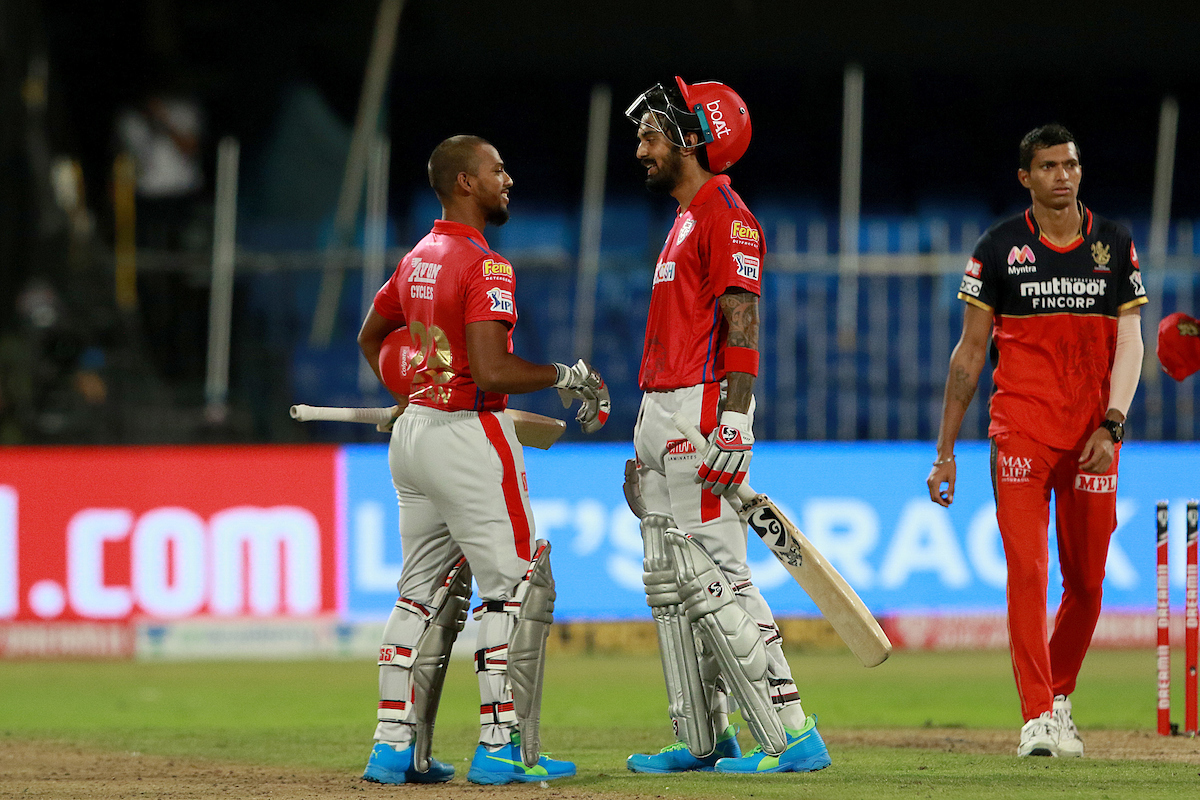 There was a drama in the final over, but Kings XI Punjab (KXIP) returned to winning ways after beating Royal Challengers Bangalore by eight wickets in Match 31 of the Dream11 Indian Premier League (IPL) 2020 at the Sharjah Cricket Stadium on Thursday.

KXIP had moved to 170/1 after 19 overs and needed just 2 runs to complete their second win. But, Chahal, bowling the final over, held his nerve and did a remarkable job as KXIP could only score a run from the first five balls and also lost Gayle after he was run out on the penultimate delivery.

With 1 needed from the last ball, there was a possibility of yet another Super Over. But, Nicholas Pooran slammed a six on the final ball and took KXIP home.

Needing 172 runs to win, KXIP openers KL Rahul and Mayank Agarwal made a watchful start as KXIP scored 5 from the first two overs.

Rahul, then creamed a six off Chris Morris in the third over as KXIP moved to 18/0. RCB introduced spin into the attack in the fourth over and Mayank opened his shoulders as he scored two fours and a six off Yuzvendra Chahal.

Rahul and Mayank hit two sixes and a four between them in the next two overs and completed yet another fifty-run stand as KXIP moved past fifty at the end of the six overs.

Mayank added one more six and four to his account but got out for 45 in the eighth over after Chahal broke through his defence to give RCB their first breakthrough after the 78-run opening stand.

RCB kept the things extremely tight in the next three overs, allowing KXIP only 10 runs.

Rahul, though tonked two mighty sixes in the 12th over bowled by Mohammed Siraj as KXIP crossed the 100-run mark. Chris Gayle joined the six-hitting party as he went after Washington Sundar in the next over.

While RCB bowled two quite overs, conceding just seven runs, Gayle took on Siraj in the 16th over, hitting two sixes and a four and in that process, brought up the fifty-run partnership with Rahul.

The big-hitting West Indian continued his merry ways and completed his half-century in the next over, slamming two sixes off Washington Sundar.

Earlier, KXIP made three changes to their side as Deepak Hooda, on debut for KXIP, Chris Gayle and Murugan Ashwin were named in the playing XI. Meanwhile, RCB remained unchanged.

After RCB elected to bat, Aaron Finch hit a six in the first over off Glenn Maxwell and followed it up with an aerial shot over mid-on for four in the second over.

While Devdutt Padikkal creamed a four and a six over the course of the next two overs, he was done in by an Arshdeep Singh’s delivery that gripped a little more than Padikkal had expected and he ballooned one to the short cover to get out for 18.

Virat Kohli announced his arrival in style, hitting two fours – a Kohli special cover drive and then, a flick – off the first three deliveries he faced before adding one more four to his account in the sixth over as RCB moved to 57/1 at the end of the powerplay.

Although Finch got a life on the first ball of the seventh delivery, he got out on the next ball after M Ashwin snaked one through the right-hander’s defence to give KXIP their second wicket.

Washington Sundar then joined Kohli in the middle and KXIP managed to keep things tight, conceding just 21 off the next 21 deliveries. At the halfway stage, RCB were 83/2, with Kohli batting on 25 and Washington Sundar unbeaten on 13.

The pressure KXIP applied, worked as M Ashwin picked his second wicket after Washington Sundar tried to break the shackled and was caught in the deep in the 11th over.

KXIP continued their good work with the ball as the spinners did not let RCB up the ante. The next three overs saw RCB score 15 runs and move past hundred.

Dube, who was batting on 8 off 12 balls at the end of the 14th over, shifted gears and did it in some style. The left-hander tonked two successive sixes off BishnoI to take RCB past 120.

KXIP though picked three wickets in the course of next three overs. In the 16th over, Chris Jordan, with a short ball, had Dube caught.

Mohammad Shami, bowling the 18th over of the innings, then struck big as RCB lost AB de Villiers and Kohli. First, the right-arm pacer dismissed de Villiers after the batsman mistimed his shot and gave an easy catch to Deepak Hooda near extra-cover. Two balls later, Kohli got out for 48 after Rahul completed a diving catch.

RCB were 137/6 after the end of 18 overs and needed a big finish and Chris Morris and Isuru Udana did just that as the two added 34 runs in the last two overs.

Morris cranked a six in the penultimate over bowled by Jordan before going after Shami in the final over. Morris hit a four on the first ball before he and Udana creamed three sixes off the last four balls to take RCB to 171/6 at the end of the 20 overs. While Morris remained unbeaten on 25 off 8 balls, Udana scored 10* off 5 balls.