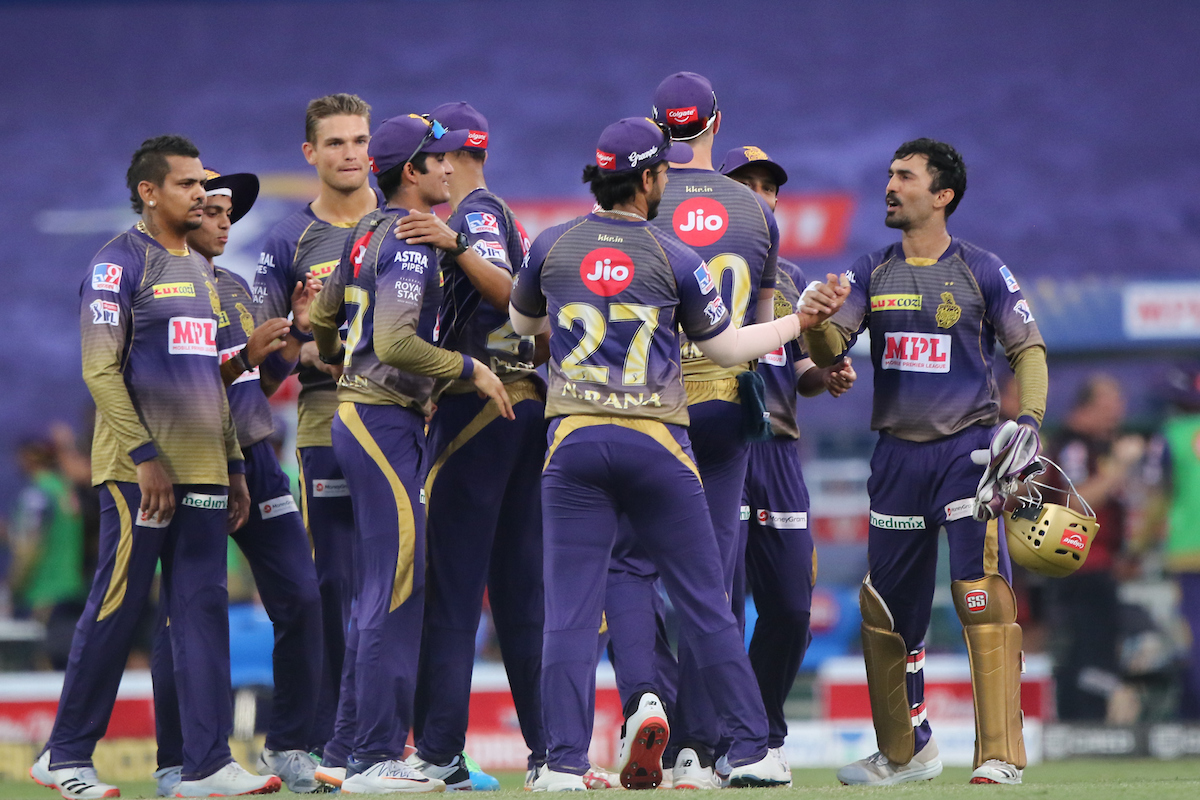 Kolkata Knight Riders (KKR) held their nerve for the second time in a row and pulled off a thrilling two-run win, beating Kings XI Punjab (KXIP) in Match 24 of Dream11 Indian Premier League (IPL) 2020 at the Sheikh Zayed Stadium in Abu Dhabi on Saturday.

After electing to bat, KKR lost Rahul Tripathi early as Mohammad Shami disturbed the timber in the third over. KXIP picked their second wicket in the next over following a mix-up between Nitish Rana and Shubman Gill.

KKR needed some stability at that stage and Eoin Morgan and Gill did just that even as KXIP managed to keep things extremely tight. The KKR duo added 49 runs together before Morgan was holed out for 24 at long-on off Ravi Bishnoi’s bowling in the 11th over.

With KKR requiring to change gears, skipper Dinesh Karthik joined Gill in the middle. Karthik did not for too long as he creamed a six on the final ball of the 14th over to take KKR past 90.

In the next over, Gill brought up his second fifty of the IPL season as KKR moved past hundred.

Karthik then started to up the ante as he took on Arshdeep Singh, hitting the left-arm medium-pacer for three fours in the 16th over. The DK show continued as he went after Chris Jordan in the next over, hitting the England pacer for two fours and a six over long-off as KKR crossed 130-run mark, with Karthik moving to 43 off 19 balls.

While KXIP managed to end Gill’s innings in the 18th over, DK continued his merry ways, bringing up his first fifty of IPL 2020 in 22 balls.

In the chase, KL Rahul got an early life as Russell could not hold onto a running catch and injured himself while saving a boundary.

Mayank Agarwal then creamed two fours and a six in the fourth over off Prasidh Krishna. KXIP brought up their fifty in the seventh over.

While there were a few overs where KKR did not concede many, Mayank hit two crisp fours in the 11th over KXIP moved closer to hundred.

Two over later, KL Rahul, who hit two successive fours, and Mayank notched up their fifties as KXIP continued their march in the chase.

KKR managed to break the Mayank-Rahul partnership in the 15th over as he dismissed Mayank for 59.

Nicholas Pooran and Rahul then scored 19 off the 16th over, with Pooran hitting a four and a six and Rahul adding one more four to his account.

KKR had pulled back a game at the death against CSK and they once started to pull things back against KXIP when Sunil Narine, conceding just two runs, dismissed Pooran in the 18th over.

With 20 needed from two overs, Prasidh Krishna gave away only 6 runs and picked two wickets, including that of KL Rahul.

KXIP needed 14 off the last over and Narine was handed over the responsibility to bowl that over. While KXIP could only score 2 off the first two balls, Glenn Maxwell hit a four off the third to bring down the target to 8 from 3 balls. KKR then gave away just a run and scalped a wicket of Mandeep Singh over the next two balls, leaving KXIP to score 6 off the last ball to push the game into the Super Over.

While Maxwell went big, the ball landed just before the boundary rope for four as KKR won the game by 2 runs to add two points to their account.