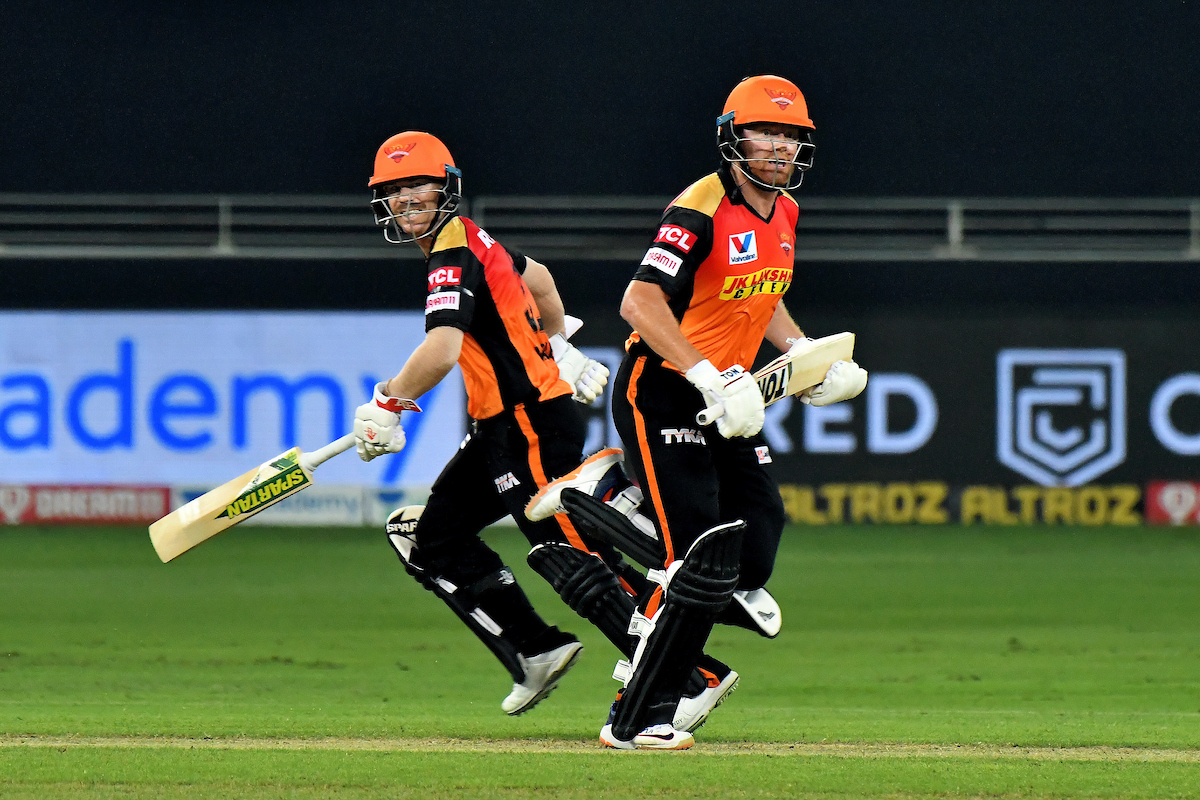 After electing to bat, SRH were off the blocks quickly as David Warner hit two fours in the first over, which also included five byes, bowled by Sheldon Cottrell.

While Mujeeb-ur-Rahman, playing his first game of the season, and Mohammad Shami conceded 13 runs in the next overs, Jonny Bairstow hit three fours off Cottrell’s second over as SRH moved past 40.

Bairstow, then got a life after KL Rahul, despite a dive, could not hold onto a difficult chance off Shami’s bowling. Warner, then hit two fours as the pair completed the fifty-run stand, their second of the season.

After a couple of quiet overs, Bairstow targeted Ravi Bishnoi in the eighth over, hitting the young leg-spinner for two sixes and a four. Warner joined the six-hitting party in the next over.

Bairstow, then brought up his fifty in the 10th over before the he and Warner completed the hundred-run stand for the opening wicket.

The merry ways continued as Bairstow hit two sixes and a four off in the 11th over bowled by Glenn Maxwell. Couple of overs later, Warner brought up his 50th IPL fifty and his ninth successive fifty-plus score against KXIP.

Bairstow, meanwhile, moved into the 90s, hitting two sixes off Mujeeb to push SRH past 150 at the end of the 14th over.

KXIP needed something special to stop the Warner-Bairstow juggernaut and pull back the things, and young Bishnoi did the trick for KXIP, dismissing both the SRH openers in the 16th over.

First, he had Warner caught in the deep and then trapped Bairstow before the wickets for 97, after KXIP opted for a review.

In the next over, Arshdeep Singh had Manish Pandey caught and bowled as KXIP scalped three wickets, giving away just a run.

Bishnoi picked up his third wicket of the night after Abdul Samad holed out in the deep in the 18th over as KXIP continued their fightback into the game.

Arshdeep picked his second wicket of the night and SRH lost their fifth wicket in the space of 15 runs as Nicholas Pooran took a neat catch in the deep to get Priyam Garg out.

Abhishek Sharma and Kane Williamson, though added 24 off 10 balls as SRH ended their quota of 20 overs, scoring 201/6.

In the chase, KXIP needed a big opening stand, but they lost Mayank Agarwal early via a run-out, courtesy an outstanding fielding effort from Warner. First, he made a diving save running towards his left at mid-off, and then threw it accurately to the bowler to catch Mayank short of his crease.

While Prabhsimran Singh hit a couple of crisp fours, he got out for 11 after Garg hold on to a sharp chance to give SRH their second wicket.

Pooran came out all guns blazing, hitting 3 sixes and a four, to march to 25 balls.

But Abhishek, after conceding two sixes in the over, picked the big wicket of KL Rahul after the KXIP skipper was caught in the deep by Williamson.

Pooran, though continued tonking the balls in the stands for fun as he went after Samad in the 9th over, hitting as many as four sixes and a four, and in that course brought up the fastest fifty in the IPL 2020 in 17 balls. The 28-run over meant that KXIP moved past 90.

KXIP moved past hundred in the 11th over, but lost their fourth wicket in the same over after Garg’s direct hit caught Maxwell short of his ground. SRH continued to chip away as Rashid got amongst wickets, getting Mandeep Singh out with a googly in the 13th over.

While Pooran had kept KXIP’s hopes alive, he got out after slamming 37-ball 77 in Rashid Khan’s double-wicket maiden.

SRH, eventually, bowled out KXIP for 132 to seal a 69-run win and add two points to their account.